PSC exam preparation: Write a short composition about "The Firefighters" and "My Hometown" 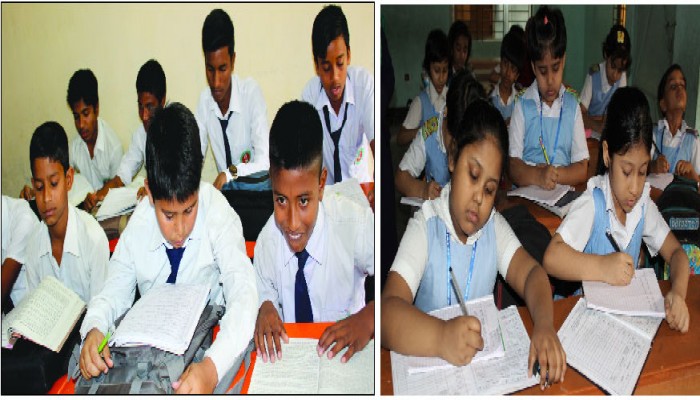 Write a short composition about "The Firefighters". Answer the following questions in your composition. [Unit 9 : Lesson 1-2]

(a) Who are the firefighters?(b) What do they do?

(c) What happened to Raju's school?

(d) What did the teachers do then?

The firefighters are those who fight with and put out the fire. When there is a fire, they come and try to put out the fire. In our text, when Raju was in class five, there was a fire in his school. The teachers helped the students to leave the building quietly and safely. Raju is a full time firefighter now.

A firefighter is a trained person who puts our fires and rescues people and their belongings from the fire. He works in the fire department. He plays an important role in putting out fires. In Bangladesh it is known as fire brigade. There are two types of firefighters. Some are full time workers and some are volunteer firefighters. The volunteer firefighters are also paid for their help. A firefighter has special uniform, boots and helmet. He is always ready for any urgent call of fire. Though his main job is to put out fires, he also trains people to become firefighters. Sometimes he visits schools and other institutions and speaks about preventing fires. He also tells people what they should do if fire takes place. People should be physically fit, brave and careful to be firefighters.

23.Write a short composition about "Kishoreganj". Answer the following questions in your composition. [Unit 10 : Lesson 1-2/3-4]

(c) What are the important things in Kishoreganj?

(e) What river flows through the town Kishoreganj?

Kishoreganj is a small town, but there are many important places in and around it. It is about 145 kilometres from Dhaka. The important things in Kishoreganj are the largest Eid fair grounds, called Solakia Eid Ground and the well-known Govement Gurudayal College. Some important persons in Kishoregsanj are Chandrabati, Upendra Kishore Roy Chowdhury, Sukumar Roy, the great painter Zainul Abedin and Syed Nazrul Islam, the first acting president of Bangladesh. There is a beautiful river named Narasunda flowing through the town Kishoregsnj.

Birthplace/Native place is called hometown.The name of my home town is Kishoreganj. It is a district headquarters and is only 145 kilometers north-east of Dhaka. The name of Kishoreganj comes from the name of an old landlord known as Brojakishore Pramanik or Nandakishore Pramanik. The district consists of 8 municipalities, 13 upazilas, 110 unions and 1794 villages. The area of Kishoreganj town is 19.57 square kilometres. The river Narasunda flows across the town. There are many important places in and around this small town. The largest Eid ground known as Solakia Eid Ground, the pagla Mosque and the well-known Govt. Gurudayal College are here. The first woman poet of Bangla literature Chandrabati was bo here. The first acting president of Bangladesh Syed Nazrul Islam, two popular writers of children literature Upendra Kishore Roy Chowdhury and Sukumar Roy are also from here. The great master of painting, Zainul Abedin also comes from Kishoreganj. I am proud of my home town.