Full-fledged Conversion Effects on Operational Areas of Banks: The Case of Bangladesh

FULL-FLEDGED CONVERSION EFFECTS ON OPERATIONAL AREAS OF BANKS: THE CASE OF BANGLADESH

Few works have been done regarding bank conversion. Farooq and Yaccob (2012) argued that the increasing awareness on Islamic banking and finance has created a huge demand for Shari’ah based or Shari’ah compliant products. Banks, especially are trying to capture this huge market by either converting themselves into a full fledge Islamic banks or opening a window for the Islamic based transactions. This study highlights the reasons why traditional banks turned towards Islamic model. Ahmed (2015) mentioned some points of conversion of conventional bank into Islamic bank in their research articles. These are: Setup necessary procedures and required tools of conversion; Changing operating license according to Sharia; Restructure organizational structure to fit conversion process; Changing employing procedures to fit conversion process; Formation of a Sharia supervisory board; Formation the Sharia auditing department in the bank; Reformatting contracts to comply with Sharia standards; Open local and international Islamic banks accounts; Revamping accounts that are maintained with conventional banks. Johari (2015) found positive effect on the success of the experience in converting into Islamic banks. Overall, the effect of the factors represented (74%) of the total number of factors affecting the success of the experience in converting into Islamic banks.Fatma (2016) in her article provides an important opportunity to advance the understanding of the Sharia requirement to conversion process. She also discussed the requirements of the conversion into Islamic bank. In addition, it discusses the jurisprudential and financial reasons for why traditional banks turned towards Islamic banking. Moreover, it discusses the Accounting and Auditing Organization for Islamic Financial Institutions (AAOIFI) conversion standard. This paper, hence, provides a step further in understanding  the conventional banks conversion issue by highlighting four main areas (1) the main Jurisprudence reasons of conversion (2) the economic motives of conversion (3) explore the main conversion forms from jurisprudential point of view (4) AAOIFI conventional banks conversion to Islamic bank standard overview.

From the literature reviews, the study finds that some efforts have been made to study on some aspects of conversion of conventional banks into Islamic banks. But until now, there is a research gap as no comprehensive study has been done in this selected research field. Previous research did not attempt to evaluate the full-fledged conversion effects on the operational areas of the bank after conversion.  The study attempted to minimize the research gap to evaluate the effects on full-fledged conversion.

Objectives of the Study

The objectives of the study are:

This is a case study based research. Two full-fledged converted banks of Bangladesh are selected as sample banks. These are First Security Islami Bank Limited (FSIBL) and Export Import Bank of Bangladesh Limited (EXIM). Total 16 years data (2000-2015) are used to observe the effects of conversion. Websites and annual reports of the selected banks, internal documents and interview schedules are used as secondary and primary data sources.

Conversion indicates the bank conversion from conventional bank (interest based bank) to Islamic bank (Profit-Loss sharing based). In Bangladesh, three kinds of bank conversions are seen. These are:

A bank organizational structure defines how activities such as task allocation, coordination and supervision are directed toward the achievement of bank’s mission and vision (Rose, 2013). It can also be considered as the viewing glass or perspective through which bankers-customers see their bank and its environment. Present study observed that the banks under study maintain almost identical organization structure after conversion. Only few areas the banks changed or revised some positions. Before conversion, FSIBL did not introduce Additional managing director post, but after conversion, the bank introduces this position. Number of sponsor director also reduced by both banks after conversion. Both banks create a new committee after conversion and the name of this committee is Shariah Supervisory Committee. After conversion, banks also separated subsidiaries companies. Before conversion, incomes from subsidiaries companies are shown with the financial statements of the banks.  The selected banks under study did not change the employees hierarchy after conversion.

Comparison of General Banking Activities of Banks Before and After Conversion

Comparison of the Investment Activities of Banks Before and After Conversion

The banks under study followed interest based banking system before conversion and follow Islamic banking system after conversion.  This Islamic system prohibits the taking or giving interest in their banking activities.  Islamic bank cannot earn interest by lending the money; therefore, the Islamic banks have to undertake investment to earn profit not only for the bank itself but also for the depositors in the investment account (islamicbanker 2016).  As the principles of banking in two periods are different, so the banks under study has different investment policies, scopes and areas.  After conversion into Islamic bank, both banks under study follow some modes of Islamic investments. These are: Murabaha; Murabaha ; Bai-Muajjal; Ijara Bil Baiya; Wazirat Bil Wakala; Lease/Ijara; Quard; Musharaka Documentary Bills and Bai-as-Sarf. However, Bank is always vigilant and active to reshape the investment port-folio with the changed socio-economic scenario of the country.

Prime Areas of Investment After Conversion

Before conversion, the banks treated their investment as “Loans and Advances” based on fixed interest. After conversion into Islamic banking, it is treated only as ‘investment’. The elements of investment in two periods are as follows:

Table 2:  Comparison of Areas of Investments of EXIM and FSIBL in before conversion and after conversion

After conversion, the bank has spread out the areas of investments. During Islamic period, banks do not lend cash directly to the borrower. Bank also introduced “Islamic Investment Card after conversion. Bank claimed that the card is designed through cent percent compliance of Islami Shariah guidelines under the principles of ‘Bai-Murabaha’. No investment card was issued before conversion.

Head of cash flow from investing activities of two periods

Cash flow from investing activities of EXIM and FSIBL during conventional period and Islamic period are as flows:

It is evident from Table 3 that the items of cash flows from investing activities are similar in conventional period and that of Islamic period. After conversion, banks add a new head of investing activities named placement of fund to Bangladesh Bank (Central Bank). Besides this, before conversion, bank has no cash outflow to purchase of subsidiaries. However, after conversion bank spends cash money to purchase of subsidiaries.

Investment Trend of EXIM and FSIBL Before and After Conversion

Investment of a bank means utilization of funds to earn profit in future. A comparative analysis of bank investment of before conversion and after conversion is given below:

Table 4: Investment comparison between before conversion and after conversion

Table 5: Paired Samples Test of Investment Before and after conversion

Note: BC= Before Conversion; AT = After Conversion 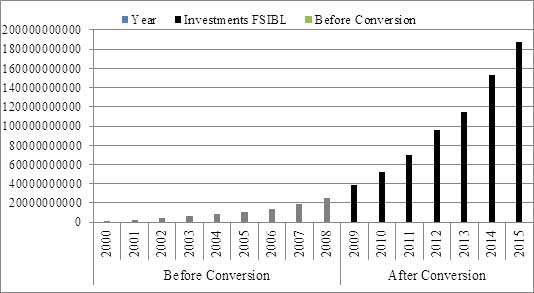 Figure 01: Historical investment growth of FSIBL before and after conversion 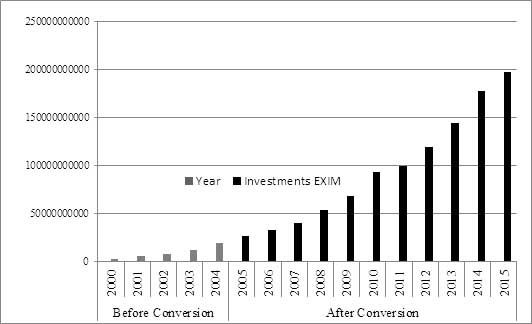 Figure 02: Historical investment amount of EXIM Bank Limted before and after conversion

Foreign exchange operation is one of the significant functions of the bank. It plays a vital role in overall economy of the country. Bank collects information from numerous sources relating to cost and revenue from foreign exchange operation. Through export, import, and foreign remittances Foreign Exchange department of the banks earns their profit. Banks is the intermediary of all export, import, and remittance activities.

Both FSIBL and EXIM Bank Limited are engaged in foreign exchange activities from the very beginning of their commencement of business. Volumes of transactions increased after conversion of the banks. Numbers of foreign correspondents increased after conversion than that of before conversion. It is found that before conversion, number of money transfer channels for foreign remittance was poorly used by the banks. But after conversion, the banks used 11 of money transfer channels for foreign remittance of the clients. Some of these are Western Union, X-Press Money, MoneyGram, RIA, Koinstar, Trevellex etc. 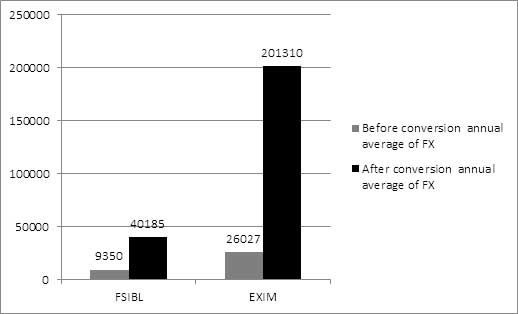 Figure 3: Comparison of before conversion and after conversion average income of Foreign Exchange of FSIBL and EXIM Bank Limited

Banks use similar kind of instruments in their foreign exchange activities before conversion and after conversion period.

Effects on the objectives of EXIM and FSIBL after conversion

Effects on the Objectives of EXIM after Conversion

Table 7: Effects on the Objectives of EXIM after Conversion

Eventually after conversion, the bank also emphasizes on providing high quality financial services in Export and Import trade; providing efficient customer service; maintaining corporate and business ethics; being trusted repository of customers’ money and their financial adviser; making its products superior and rewarding to the customers; display team spirit and professionalism; sound capital base enhancement of shareholders’ wealth and to fulfill its social commitments by expanding its charitable and humanitarian activities.

The objectives of FSIBL are somehow different under both banking systems and it implies that, conversion into Islamic banking system has an influence on the bank objectives.

Online banking activities are treated as the indicator of modern banking. After conversion into Islamic banks, both EXIM and FSIBL have shown their innovative power to develop and introduce huge number of online banking products. During Islamic Period, only three online products and services were offered by these banks. But after conversion into Islamic period, both banks introduced and offered almost 15 online services with the old online banking products and services.

After conversion, both EXIM and FSIBL introduced new heads of expenses. These are: Allowances for the members of Shariah Supervisory Committee and Zakat expenses. Mannan (2007) stated in his article that Obligatory zakat on the bank stipulated by the Islamic Shariah will be paid to the bank’s Zakat Fund. Zakat is paid by EXIM bank and FSIBL at the rate of 2.58% (instead of 2.50% as the bank maintains its account following Gregorian year) on the closing balances of statutory reserve, general reserve and exchange equalization account. Banks do not pay any Zakat on paid up capital and customers deposited amounts. It is the responsibility of the shareholders and depositor’s respectively.

EXIM, Bangladesh. (2016, May 12).  Financial highlights of EXIM. Retrieved from http://www.eximbankbd.com/report/Financial_Highlights